Solenoids in direct-acting valves open the valve magnetically through direct action, hence the name. The coil pushes and pulls a shaft and causes the seat of the valve to shift. When there’s no electrical current, the spring coil returns to the default position. Direct-acting valves need full power to operate the valve. Whether that position is normally open or normally closed depends on the application.

In an energized normally closed valve, the inlet pressure is released when the solenoid coil retracts, thereby allowing the fluid to pass through the outlet. The solenoid coil is typically larger in a direct-acting valve, compared to a pilot-operated valve. 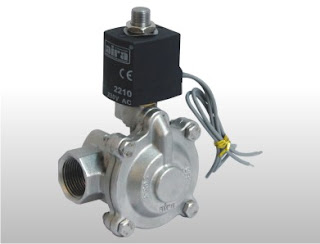 A 2-way valve is used in On/Off applications that require a quick response and higher flow. Two-way valves can replace a lever to automate a process. In venting applications, the valve is actuated to release excess pressure on the fluid.

A 3-way valve has three ports. This allows for it to be in 1 of 2 states, or circuits. A 3-way valve can open, close, convey, or distribute, or combine media.

In a 4-way valve, all ports are in the off position by default.  They create two states, or actions, and have two exhaust ports. You control the speed of each action by attaching a flow control valve to each exhaust port.